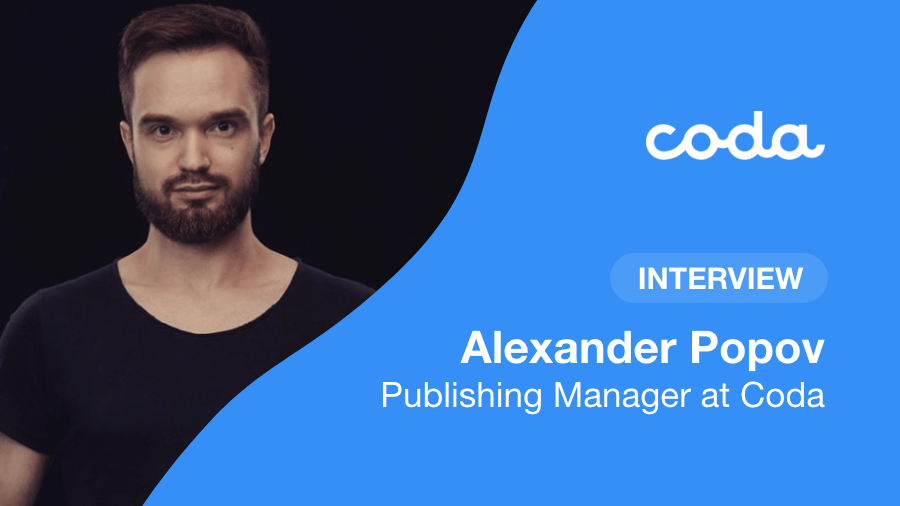 Player 2 has entered the game. All jokes aside, we’re thrilled to welcome Alexander Popov to the Coda crew, as one of our new Publishing Managers. And as a way to introduce him to you lovely people, we sat down and drilled him with as many questions as we could muster.

So read on and you’ll not only learn more about our new recruit, but also get some expert advice around key changes in the industry, first-hand tips and tricks, as well as some more info around what exactly Alexander will be doing at Coda.

So, Alexander, how are you finding the hyper-casual industry?

It’s no secret that hyper-casual games are booming. It’s a brilliant place to be at the moment. From an outside perspective, you’d think it’s a bizarre business model – spending time and money on something with such a short life. We hear rumours that the genre will exhaust itself. But it just keeps proving sceptics wrong. The numbers are growing, and each year the revenue is getting bigger and bigger.

Which is an excellent sign for all of us. We’ll keep both eyes on the trends, and watch how the industry grows and develops. But the hyper-casual market is a way of life. It’s no regular nine to five office job. It’s competitive. Fast-paced in its nature. But incredibly rewarding and exciting. I love it.

And where do you think the industry is headed?

It’s moving fast, and the biggest thing is that it’s rapidly changing all of the time. There have been some good changes, and then some trickier ones for sure.

Players are getting pickier

Let’s go back a few years. Players weren’t as picky. They were more willing to forgive our mistakes (say a weak game design or art style). Nowadays, they’re more educated, so we have less room to make mistakes. They know exactly what they want from a game. And the amount of competition out there only amplifies this, as players now have so much to choose from.

Social trends will dictate the next top chart

We also have new sub-genres appearing on the hyper-casual market as it develops (take Arcade Idle, for example). It’s evolving so quickly.

Games are getting deeper

Look at runner games, as an example. We can see how they are evolving from each other, getting deeper and bringing new approaches to the market. Different camera angles, new narrative sequences and stories, more catchy  finals. There’s so much more to consider now.

The relationship between developer and publisher is changing

Again, if we look back a few years, game studios would reach out to publishers in a desperate need to help test their prototypes. But now, there are loads of mergers and acquisitions between publishers and studios, and a ton of exclusive deals. (That’s not even mentioning pay-per-prototype deals.)

I think it’s safe to say we’ll see the rise of more independent hyper-casual game studios, to a point where these studios will be publishers in their own right. And this is where Coda’s thinking is at the moment – we’re already working on new products and services to help developers and studios be more independent.

Did lockdown change anything?

Definitely. There’s been a boom of new people spending more time playing games, with hyper-casual being among them. Installs shot up, and there was a huge incline in revenue. We particularly noticed a rise in hyper-casual simulation games, too.

People were sitting at home for weeks during peak lockdown, by themselves. So they turned their attention to games. And those who played them, started to play more. I reckon that social distancing, and lack of human connection, is one of the root causes of the sudden spike in simulation games, where people suddenly had a chance to try out other professions and new things that they otherwise wouldn’t be able to do.

All in all, it’s benefitted the industry. A lot. I would even go as far to say that lockdown has introduced new people to gaming, who otherwise would have never tried it.

What’s your advice to studios?

Great question. I actually have three pieces of advice, if that’s alright?

You’re entering into a highly competitive, but highly rewarding industry. It’ll be tough sometimes. But keep trying, and don’t give up. And talk to as many people in the industry as possible. You’ll learn so much this way, and get a ton of insights.

Players should understand what your game is about and how to play it within seconds of seeing it. But most importantly, you’ll want it to be engaging and fun-to-play. Keep the controls simple, and don’t overlay too many mechanics. This’ll just hurt the player’s perception.

And lastly, watch the charts.

There’s a world of inspiration on the app stores, and the top charts are the gems in the mud – the ones that have been through countless iterations to reach “perfection”. So do your research, learn from the best, and get cracking. I can’t wait to see what you craft.

What did you do before Coda?

So I actually started out in Digital Marketing a few years back, and stumbled across the gaming industry by chance. It’s safe to say I immediately fell in love with F2P and hyper-casual.

It’s pretty straightforward after that. I wanted to build up my understanding of the industry and grow my expertise in the field. So I did a lot of research, played a bunch of games and chatted to as many people as possible. Shortly after, I landed my first role at a publishing house.

How did you find the career change?

I loved it. Best decision I’ve made.

I joined a small team of some very passionate people at Moonee. We worked hard, and had a great time building and releasing so many different titles. I think one of the biggest things I learned from them is test, test, test. After a year with Moonee, I then joined a new publishing company – Boombit. It was brilliant. I again learned so much from so many talented people.

After a while at Boombit, grinding a bunch of XP and leveling up as much as I could, I decided to shift gears and move to Coda. And so far, it’s been a blast.

And what are you doing with us?

So I’m your new publishing manager. I’ll be teaming up with studios to help them grow and make great games together. I’ll help you every step of your journey. From the ideation process and game design to setting up your marketing strategy, helping you get new users, even down to nailing down your monetization strategy and perfecting your game on the app stores.

Why did you choose Coda?

Choosing a company is never a simple quest.

Beside the job spec, it’s important to know whether you’ll click with the company itself. Its strategy, values, and perception of the business world. Alongside that, I think the people play a huge role when deciding. You want to make sure that the crew you’re working with are passionate about what they do.

From the very first phone call, I realised that this was going to be a perfect match. I’ve joined a team with strong management skills, a clear strategy, and a cutting edge approach to the industry. And it may be a bit premature to say, but it’s an exciting time to be a part of the team, especially with what’s on our roadmap.

At the time, I had no doubt that we would be a good fit. And now? I’m excited to share all of my expertise and experience, and I hope to be an excellent addition to an already s**t-hot team, if I’m allowed to say that.

Tough question. In the true nature of hyper-casual, it changes from month-to-month. One of my favourite types are runner games. I really enjoyed Count Masters. This is a brilliant example of blending puzzle mechanics with runner games.

For non hyper-casual, I would probably pick Red Dead Redemption 2. It’s filled to the brim with action and adventure, and I just love open-world third-person shooter games. It’s got a brilliant story, and is arguably one of the best games on the market.

Find out what Coda can do for you

As I said above, Coda is going through a lot of changes and releasing so many new products and services. There’s something for everyone. So make sure to gander through what we have to offer. And don’t hesitate to get in touch if you have any questions.