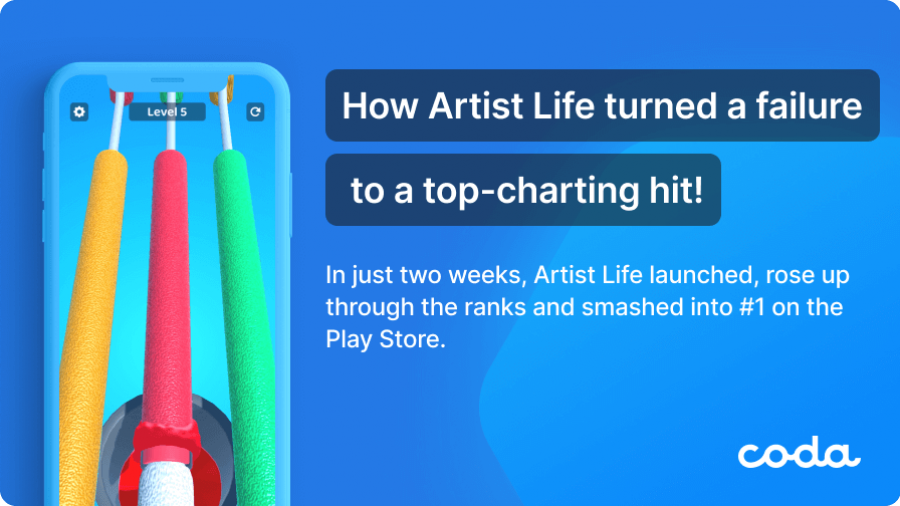 In just two weeks, Artist Life launched, rose up through the ranks and smashed into the number one spot on the Play Store, and number four on the App Store. But a few months ago, the idea was nearly scrapped before it was started. Its ancestor, a small prototype game, we thought was a failure.

So how did we take that failure and turn it into a success? How did we increase the playtime by around three times the original?

It all started with a concept: Colour Squeeze

In our Concept Store, studios can choose concepts that we know players are interested in. We’ve tested these concepts to see which are marketable.

And there was one concept that had great marketability: Colour Squeeze.

But three different studios had tried turning it into a hyper-casual game. In every instance, the playtime just wasn’t good enough.

“Colour Squeeze just didn’t work,” explained our publishing manager Verda Seneor. “The concept was clearly resonating with people. At this part of the story, we only knew that squeezing out paint caught our player’s eye. Everyone was clicking the video, but whenever we tried to build a game with those mechanics, players just drifted off and grew bored. It was incredibly frustrating.”

While the mechanics weren’t working, there was clearly something in the idea. So we approached VOG Games with a new angle. Rather than trying to build a game that is just a repeat of the marketing video, we decided to craft something with multiple mechanics, all around the same theme. Which is where hyper-compact comes in.

“We all love creativity, on some level. But it was the lifestyle of an artist which was really attractive for this game. We realised that it wasn’t the mechanic that people wanted, but the fantasy,” Verda said. “So we decided to change tact and started working with VOG Games to make a hyper-compact game instead.”

The hyper-compact genre is much closer to a simulation. The focus is on graphics and a sense of becoming the character, almost like an interactive TV show. Artist Life was born.

Working together with the studio

At Coda, we don’t just leave studios on their own. We’re with them throughout the journey, from the idea to the monetization. Over the course of Artist Life’s journey, we helped with:

“We helped VOG Games at all stages of the funnel, and they were absolutely fantastic the whole way. It was a very hands-on process for both of us. We’d speak every day, share ideas, and work together on new mechanics.” Verda said. “We started this journey together, and we’re still working closely now: checking the data and optimising the game.”

While working on Artist Life with VOG Games, we’ve both learnt a lot about how to work together. Namely, how to create successful games faster and better.

This is more than a journey of one game, it’s about both studio and publisher growing together and regularly creating games that will break into the charts. So now, it’s time to start getting to work on the next game.

We want to help studios make a killing, making games. So if you’d like to learn more about how to become a partner and work with us on our next title, let us know.

We use cookies to ensure that we give you the best experience on our website. If you continue to use this site we will assume that you are happy with it.Ok